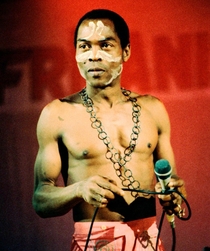 Musician and political activist. Born Olufela Olusegun Oludotun Ransome-Kuti in Abeokuta, British Nigeria. In 1958, he was sent to London to study medicine but decided on music instead, and formed the band Koola Lobitos. He is regarded as the pioneer of Afrobeat, an African music genre combining traditional Yoruba and Afro-Cuban music with funk and jazz. Returning to Nigeria he became an outspoken critic of his country's military rulers. He founded the Kalakuta Republic commune, which declared itself independent from military rule.
His brother announced that he had died from complications related to AIDS, although Kuti himself had been an AIDS denier.

This section lists the memorials where the subject on this page is commemorated:
Fela Kuti

Opera singer.  Born Liverpool. Died at home, where the plaque now is.