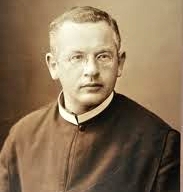 Catholic priest. Born Roussel Davids Byles in Leeds. He was ordained in 1902, (which is when he took the name of Thomas), and in 1905 was assigned to St Helen's Parish in Chipping Ongar, Essex. He travelled on the RMS Titanic in order to officiate at his brother's wedding in New York. As the ship was sinking, he reputedly twice refused a place on a lifeboat, and gave absolution to more than a hundred passengers who remained trapped on the stern of the ship. His body, if recovered, was never identified. In 2015, the first steps were taken to making him a saint.

This section lists the memorials where the subject on this page is commemorated:
Father Thomas Byles

Non-conformist minister.  Born in Cambridgeshire.  Died Hackney.  Buried in B...

Here we summarise the splendid London Gardens Online : Land given by Sir Han...