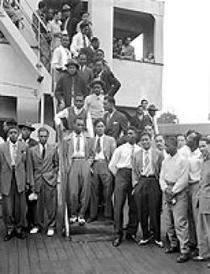 Liner, built in Hamburg with the name 'Monte Rosa' as a luxury cruise ship. Many of the passengers in the early days were privileged members of the Nazi Party. She saw active service in WW2 and was captured by the British in May 1945. The Empire Windrush was acquired from Germany at the end of WW2 and was used as a troopship until 1954 when it sank in the Med. as the result of a fire.

But the ship’s claim to fame was its arrival on 22 June 1948 at Tilbury Docks carrying 792 passengers from Jamaica, people responding to an advertisement to work in England in the post-war reconstruction. This was the first large-scale arrival of black people and it caused a stir.

See Diamond Geezer for where the travellers slept on arrival, and an explanation for why so many settled in Brixton. On what turned out to be her final voyage, a fire broke out on board and she sank while being towed to Gibraltar.

18 June 2018: The government announced that "national Windrush Day will take place on 22 June every year to celebrate the contribution of the Windrush Generation and their descendants." This announcement was made in the midst of the media storm caused by the discovery of just how badly the Windrush immigrants had been treated by that very government. We believe the day was already being celebrated by the black community, on that date, back in 2017, possibly earlier, but in 2018 it was officially recognised and some funding provided.

2020: While statues of slave-traders are being taken down as a response to the Black Lives Matter campaign, one new memorial is being planned. The New Statesman (paywall) reports that a shipwreck hunter is hoping to find funding to search for the anchor of the Windrush, for erection somewhere yet to be determined: "Tilbury Dock, Windrush Square in Brixton, or a spot in central London as possibilities."

This section lists the memorials where the subject on this page is commemorated:
Empire Windrush