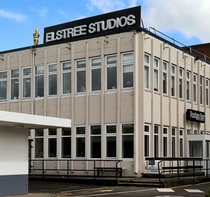 2021: Paul Welsh MBE, historian of Elstree Studios, wrote a piece about the BFI plaques erected by Elstree Studio for This Is Local London : about 25 years ago "the British Film Institute decided that 200 film plaques should be erected around the UK and they would be free, so I applied and received 20. This was in recognition of the unique film history of Elstree and Borehamwood."