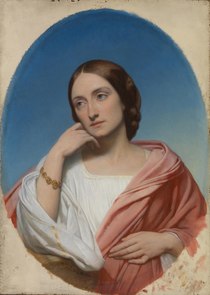 Salon hostess, philanthropist, and author. Born as Ellen Julia Teed at Madras. Educated in England. Her family bought property in Stanmore in 1835.

1840 married Robert Hollond. His wealth enable them to have 5 homes including Stanmore Hall. They lived mainly at 63 Portland Place but after 1848 they often wintered in Paris and at Villa Allegria in Cannes. They entertained on a grand scale, especially welcoming the literary people of the time.

Her publications include: 1864 'A Lady's Journal of her Travels in Egypt and Nubia' and, in French, a book on the Unitarian William Channing and one on Quakers.

The couple was childless but in 1844 she founded what is said to be London's first crèche. The couple were renowned benefactors to local and national causes, including the welfare of children, and founded a home for English nurses at Cannes - presumably nurses who cared for expat invalids there for their health. Died at Stanmore Hall and was buried at Great Stanmore.

The 1851 portrait is by Ary Scheffer.

This section lists the memorials where the subject on this page is commemorated:
Ellen Julia Hollond

Erected in loving memory of Robert Hollond by Ellen Julia his widow, 1881. B....

Ordinary seaman aged 24, on the 'Victory' at the Battle of Trafalgar.  From C...