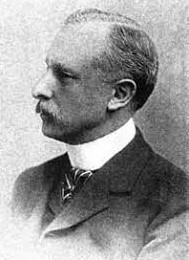 Architect. Son of architect George Hall and father of architect Edwin S. Hall. His master-work (with his son) is surely Liberty's though he is also known for a number of hospitals, including the Homoeopathic Hospital in Queen Square.

In the 1881 census he is described as an architect living at 8 Park Road, West Dulwich, with his wife, their children Edith and Edwin, a nurse and a female general domestic servant. On 10 December 1883 he was initiated as a Freemason in the St George and Corner Stone Lodge No.5 that met at Freemasons' Hall, Great Queen Street, Holborn. He gave his occupation as an architect of 57 Moorgate Street, London. The 1891 census shows him living at 'Hillcote', Rosendale Road, Streatham, with his wife, their seven children, a cook, a parlour-maid, a nurse, an under-nurse and a monthly nurse.

The 1901 census claims he was living at 'Hillcote', Rosendale Road, Tulse Hill, with his wife, their seven children, a cook, a parlour-maid, a housemaid and a nurse. In the 1911 census his address is shown as 'Hillcote', 176 Rosendale Road, Dulwich and he was living there with his wife, two daughters: Ruth and Audrey, a cook, a parlour-maid, a housemaid, a child's maid, an under-housemaid and a professional nurse. There were also four visitors: Edith Audrey Clay (b.1910) who was the daughter of his eldest daughter Edith, Jessie Annette Byrne (1869-1918) who was his sister in law and who died a spinster, Mildred Charlotte Sophia Byrne (b.1891) who was a niece and William Graham Wallace (1893-1985) who was a nephew.

He died, aged 72 years, on 15 April 1923. His probate records give his addresses as 54 Bedford Square, Bloomsbury and Hillcote, Rosendale Road, West Dulwich and confirm he died at the West Dulwich address. Probate was granted on 15 June 1923 to his sons, Edwin Stanley Hall and Major George Leslie Hall, Royal Engineers. His effects totalled £44,848-6s-8d.

This section lists the memorials created by the subject on this page:
Edwin Thomas Hall

Middlesex Hospital and Barnato and Joel

We had not heard of the Barnato-Joel family before coming across this plaque....

Architect. Born Manchester (or Lancaster depending on source) as Lewis Henry ...

With the two other architects Sir Herbert Baker and Alexander T Scott, Vernon...