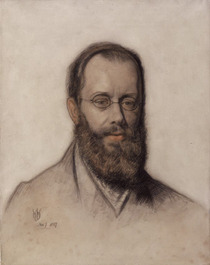 Born Bowman's Lodge, (now Bowman's Mews), the penultimate of 21 children. Artist and writer of nonsense works, such as The Owl and the Pussycat, and limericks, e.g.
There was an old person of Putney,
Whose food was roast spiders and chutney,
Which he took with his tea,
Within sight of the sea,
That romantic old person of Putney.

Gave drawing lessons to Queen Victoria in 1846. Suffered from epilepsy and depression. Was a successful painter but in 1862 a bad review published in the Times proved a turning point in his career.  His professional painting career never recovered but his nonsense verse came to the fore.  Spent the last 17 years of his life at San Remo, Italy, where he died.

Nonsenselit is worth a visit.

This section lists the memorials where the subject on this page is commemorated:
Edward Lear

Born as Lorenz Alma Tadema in Friesland, The Netherlands. Painter, famous for...