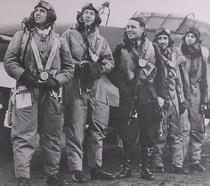 Knowing that America would eventually enter the war, and inspired by stories of the RAF pilots many American men responded to the call for pilots to replace those lost in the Battle of Britain.
From the picture source website:
"244 American pilots were to fly for the Eagle Squadrons; Number 71, 121, and 133 Squadrons of the Royal Air Force Fighter Command. It was the RAF's policy to pick Englishmen as squadron and flight commanders and 16 of these British pilots served with the Eagle Squadrons. From the time the first Eagle Squadron was formed in September 1940 until all three squadrons were disbanded and incorporated into the USAAF in September 1942, they destroyed 73 1/2 German planes while 77 American and 5 British members were killed. "

This section lists the memorials where the subject on this page is commemorated:
Eagle Squadrons