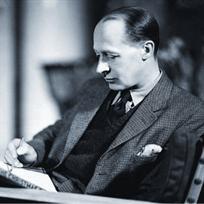 Painter and illustrator, most famously of Winnie the Pooh.   Ernest Howard was born 55 Springfield Road, St John's Wood.  His art school nickname, Kipper, stayed with him for life.  Served in WW1 ending as Major Shepard MC.

Worked for Punch drawing political cartoons, initially having the occasional drawing accepted and in 1921 he became a member of staff only leaving in 1953.  It was through Punch that Shepard met A. A. Milne, illustrating some Punch children's verses and then all the Winnie the Pooh books.  Pooh was modelled on his son, Graham's teddy bear, Growler.  He also illustrated the 1931 Wind in the Willows for Kenneth Grahame.   From the mid thirties - 1941 he lived with his son at 5 Melina Place, St John's Wood. Graham was killed in action in the North Atlantic.  In 1944 Shepard marred for the second time.  Died Midhurst, Sussex.

There is another London plaque to Shepard at 5 Melina Place, NW8.  It's apparently a 'DIY plaque' and has been erected out of public view, but you can see it here.

This section lists the memorials where the subject on this page is commemorated:
E. H. Shepard

Painter.  Born the Netherlands.  September 1938, avoiding the Nazis, he moved...