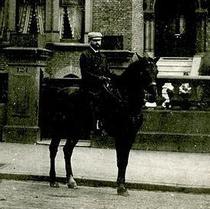 Inventor and industrialist. Born in Csorna, Hungary. Worked in Vienna before emigrating to America. Returned to Vienna where he entered a partnership making equipment for hectographs (an early form of copying documents). He moved to London, where he filed several patents, the most significant being for the 'cyclostyle' which for the first time enabled office duplicating to be done on a large scale. Died in the Hotel Ruhl, Nice.

This section lists the memorials where the subject on this page is commemorated:
David Gestetner

Plaque unveiled by two of his great great grandchildren.

Engineering company based in Ripley, Derbyshire.

Pioneering aeronautical engineers. Oswald and Eustace formed a partnership in...

In 1236/7 the City of London was granted permission to tap the Tyburn Springs...