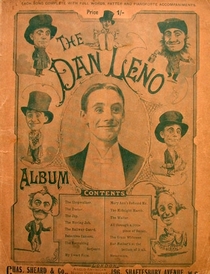 Actor and comedian. Born George Wild Galvin at 6 Eve Place, St Pancras. He first appeared on stage as a child with his parents, and in time became the star of the act. As a solo artist, he became increasingly popular during the late 1880s and 1890s, when he was one of the highest-paid comedians in the world. At the peak of his career, he performed for King Edward VII at Sandringham, and became known as "The King's Jester". However he began to drink heavily after performances, and by 1901 he had become an alcoholic. He declined physically and mentally and also suffered from increasing deafness. His death was certified as ‘general paralysis of the insane’, which at that time was a euphemism for tertiary syphilis.

This section lists the memorials where the subject on this page is commemorated:
Dan Leno