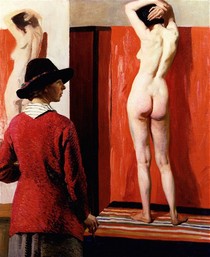 Painter. Born Derbyshire with the surname Johnson. Met her future husband Harold at Nottingham Art School, though they did not become romantically involved until 1894, after they had both left, and married in 1903. From 1907 they were in an artist's colony in Cornwall. At the end of WW1 they moved to London where Laura painted Diaghilev's ballet company from behind the scenes, a vantage point that she would use repeatedly over the years. In 1922 they took a long lease on the house in Langford Place where they each had a studio. Later they also had a home near Malvern. Harold was a successful portrait painter and Laura achieved success with a wide range of subjects, including circus performers and gypsies and was an official war artist in WW2. She was the first woman elected to the Royal Academy since its 1768 foundation, in 1936 - the year before Harold was elected. She died at Langford Place.

This is an unusual story of married artists, in that the wife not only continued her career but was, if anything, more successful than the husband. The marriage was childless, which gave Laura unusually equal opportunities to work and succeed, and she did.

Our picture is a self-portrait and shows Knight painting a nude, a shocking thing for a woman (but not a man) to be doing in 1913; at art school she had been excluded from the life class.

This section lists the memorials where the subject on this page is commemorated:
Dame Laura Knight

It is unique in that it shows exclusively in oils. It was granted its royal s...

The following text was copied from the picture source website: The Royal Soc...