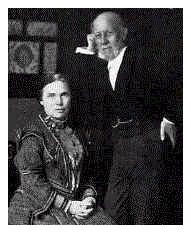 Founder of Henrietta Barnett School for Girls and Hampstead Garden Suburb. The picture shows Henrietta with her husband Samuel Barnett.
Born Henrietta Octavia Rowland. With her vicar husband she came to believe in "environmental determinism" - that the poor are brutalised by their squalid environment and so began a lifetime of philanthropic social work in the East End where they built Toynbee Hall (still fulfilling its original function in 2007) and promoted respectable work in household service as an alternative to prostitution. Her campaign to close the brothels was criticised for making the girls more vulnerable to attack by Jack the Ripper (at this point it is definitely worth following the link to her husband, Samuel). With her bulldozing personality she was nicknamed "the Vicaress". While living and working in some of the worst slums in Europe in the East End they bought St Jude's Cottage at Spaniard's Inn on Hampstead Heath as a week-end retreat. Seeing that the extension of the Northern Line out to Golders Green was about to provoke a flurry of unplanned development she formed a philanthropic trust, bought the land and oversaw the development of Hampstead Garden Suburb.
Made a Dame in 1924. Died at her home in South Square. Buried St. Helen's Churchyard near Hove, beside her husband.

This section lists the memorials where the subject on this page is commemorated:
Dame Henrietta Barnett, D.B.E.

October 2nd 1907. This tree was planted by Mrs Barnett on the occasion of th...

Prior to the death of her husband in 1913, Dame Henrietta Barnett had been li...

A merchant banker. Aged about 70 he started to lose his hearing. Founded what...

Founded 1837 with Sydney Hall in Pond Place. At Exciting we learn "In about 1...

Built by the GLC, the Pepys Estate was opened by Earl Mountbatten. The sectio...