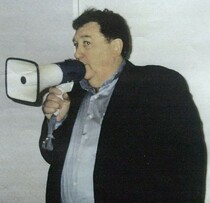 Colonel Cyril Richard Rescorla was born on 27 May 1939 in Halye, Cornwall. He was a son of Stephen Douglas Rescorla (1919-1984) and Annie Lorraine Rescorla (1918-2002). His birth was registered as just Cyril Rescorla in the Penzance, Cornwall registration district.

He left Hayle aged 17 joining the army as a paratrooper and would later serve in Cyprus. At the end of his Short-Service Commission, he joined the Northern Rhodesia (now Zambia) police before returning to London to join the Metropolitan Police Force. His tenure with the Met police was short-lived and he emigrated to the United States, arriving on 17 June 1963, where he lived in a hostel in Brooklyn, New York. He stayed there until he was able to enlist, as an American naturlised citizen, in the United States Army serving as a lieutenant and platoon leader in Vietnam and being decorated with the Vietnamese Cross of Gallantry, a Purple Heart, a Silver Star, and the Bronze Star with Oak Leaf Cluster for the courage and bravery he showed during the Battle of Ia Drang – the subject of a top-selling book (on which he appears on the cover) and the Mel Gibson movie We Were Soldiers. After leaving active duty, he remained a reserve, retiring with the rank of colonel.

Married to his wife, Susan, he eventually became head of security for the financial services firm of Morgan Stanley Dean Witter and when the North Tower of the World Trade Center was struck on 10 September 2001 the New York Port Authority public address system annouced to the occupants of the South Tower to remain at their desks. Having experienced the 1993 bomb explosion at the World Trade Centre he immediately countermanded this instrction and using a loud hailer evacuated the 2,687 Morgan Stanley employees that were on Floors 43-46 and 59-74 of the South Tower by singing and helping to keep up their spirits as he guided them towards safety. He returned to the building to ensure all employees had left was last seen alive inside on the 10th Floor. He was aged 62 years.

This section lists the memorials where the subject on this page is commemorated:
Cyril Richard (Rick) Rescorla

Lieutenant Colonel Gilmore Cecil Daniel was born on 30 November 1917 on the O...