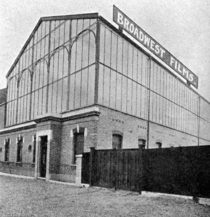 The Cunard Film Company Limited moved into a purpose-built studio, close to the Precision Film Studio. It had a capacious glass-roofed daylight stage with extra lighting from 30 Westminster arc lamps, but it folded having completed only eight feature-length films. The Broadwest Film Company took over the studio in January 1916.  Its name was derived from its founders George Broadbridge and Walter West. It became one of the top studios in the country, famous for its literary adaptations, featuring notable future Hollywood stars such as Ronald Coleman and Anna Neagle. Because of lack of funds, it went into receivership in 1921 and the original building burnt down in 1959.

This section lists the memorials where the subject on this page is commemorated:
Cunard / Broadwest Film Studio