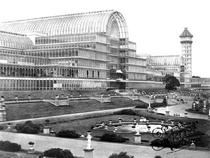 Originally erected in Hyde Park to house the Great Exhibition of 1851. It was on the section south of Rotten Row and east of West Carriage Drive with the mid-point opposite Rutland Gate.  The cast-iron and glass building was then taken down and reconstructed, modified and enlarged, in 1854 at Sydenham Hill in what was then known as Penge Park. The area around then became known as Crystal Palace. In 1936 the Palace burnt down and was not rebuilt. What remains are the terraces, the steps and some sphinxes.  The BBC reported that the UK's first fatal car accident happened at "Dolphin Terrace" at the Crystal Palace in 1896 but we can't discover exactly where that was.

The distinctive curved roof above the central transept, running north-south, was added to the design of the building to enable several elm trees in Hyde Park to be retained within the building rather than felled.  The trees are not there now and were presumably lost to Dutch Elm disease some time 1970-90.  (But London does still have elm trees - see the Londonist article and this pdf with map.)