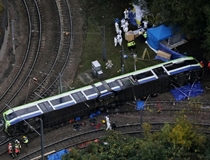 The tram carrying 69 passengers, had left New Addington bound for Wimbledon. At 6.07 a.m. as it approached Sandilands station on a sharp bend, it overturned on its right side. Seven passengers were killed, and of the others, most suffered varying degrees of injury.

At a subsequent enquiry it was estimated that the tram had been travelling at about 45 mph, when the speed limit on the bend was 12 mph. The driver was blamed for the accident, although it was believed that he was asleep at the time. Further investigations revealed more reports of drivers falling asleep. The erratic shift patterns of drivers were called into question, with one driver saying that 'Nobody is ever fully awake'.

20 July 2021: The inquest into the crash focussed on the actions of the driver, who survived the crash, but returned the verdict that the seven deaths were accidental.

24 March 2022: From MyLondon: "This morning (Thursday, March 24) the Office of Rail and Road (ORR) said it will prosecute Transport for London, driver Alfred Dorris, and Trams Operations Limited for alleged "breaches of health and safety law"."

This section lists the memorials where the subject on this page is commemorated:
Croydon Tram Derailment

Stephen Augustine Hammond was born on 5 February 1958, the elder child of Aug...