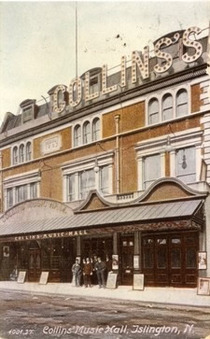 As Sam Vagg (1827-65) he was a chimney sweep but as Sam Collins he was an "Irish" singer. In 1862 he took over the Lansdowne Arms, turned it into a music hall and renamed it after himself. Sam died young but 'Collins' survived. Rebuilt in 1897 it was wrecked by fire in 1958. Only a shell remained and in 1963 all but the front elevation was demolished.

The 1958 film 'Davy' is set largely in this theatre, and is, mainly, filmed at the actual location. See ArthurLloyd for details.

This section lists the memorials where the subject on this page is commemorated:
Collins Music Hall