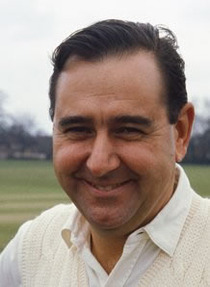 His father named him Michael Colin Cowdrey so that he would have the same initials as cricket's most famous club Marylebone Cricket Club, of which he became President in 1986-7.

He was made a Commander of the Order of the British Empire (CBE) in 1972 and knighted in 1992. In 1997 he was ennobled and became Baron Cowdrey of Tonbridge.

He died in Littlehampton, Sussex, aged 67 years, on 4 December 2000, from a heart attack having suffered a stroke earlier that year and is buried in St Nicholas Churchyard, Poling, Arundel, BN18 9PT.

This section lists the memorials created by the subject on this page:
Colin Cowdrey