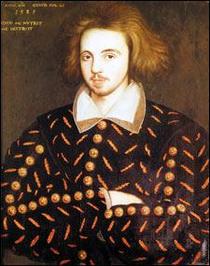 Playwright and poet, for definite. Spy? Atheist? Homosexual? Shakespeare? Baptized on 26th February at St George's Church, Canterbury. Educated at Corpus Christi College, Cambridge. His plays include: Tamburlaine, The Jew of Malta and most famously Doctor Faustus. Little else is known of his life, and even his fatal stabbing in Deptford is shrouded in mystery. This popularly occurred in a tavern brawl, although it is more likely to have happened in a private house in Deptford. One theory is that he was assassinated because he was a spy. Wikipedia has it covered.

This section lists the memorials where the subject on this page is commemorated:
Christopher Marlowe

This section lists the memorials created by the subject on this page:
Christopher Marlowe