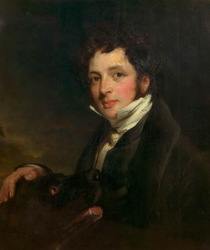 Famous for his 1821 meeting with the poet John Clare (whom he initially mistook for a highwayman), reported in 'The life of John Clare' by Martin Frederick, 1865. Friend of Charles Dickens.

Due to health concerns he spent much of his time living in Lausanne or travelling and collecting. Died Norfolk Street, now Dunraven Street W1. He had no children and was separated from his wife in 1843. Under his will his collections went to what is now the V&A Museum and the Wisbech museum, and to found the school with the plaque.

We puzzled over Wikipedia's judgemental designation of him as a hypochondriac, but then we found that in 1840 in his 'Descriptive Tour of Scotland' he cheerfully applies that term to himself: "The secret which I have to tell you, is this (come a little closer, if you please): I am a decided hypochondriac." For anyone interested in CHT, or in Scotland, this looks like an entertaining read.

Note: the OxfordDNB has him born on the 20th; Wikipedia, the 10th.

This section lists the memorials where the subject on this page is commemorated:
Chauncy Hare Townshend

Librarian to the Earl of Oxford, and antiquary.

Opened the Subway Gallery in 2006.

Secretary to the Commissioners for the 1892 Westminster Public Library. Becam...