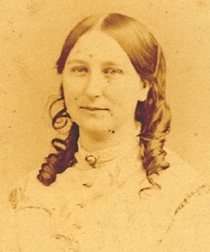 Born as Charlotte Eliza Lawson Cowan in Ireland. Moved to London in 1855. Married Joseph Hadley Riddell, a hot water engineer in 1857. They lived in St John's Lodge 1868 - 1873. Published her first novel in 1856 under a pseudonym, of which she used several, until 1866 when she used her own name, or rather the Victorian version of it: Mrs J. H. Riddell.

She published 56 books and was editor of the Home Magazine and part-owner and editor of the St. James's Magazine, a prestigious Victorian literary magazine. Her husband's business failed in 1871 which left her as the bread-winner which probably explains the prodigious output. The couple had no children. Joseph died in 1880. Charlotte died at home,12 Lampton Road, Hounslow.

We have not (yet) read any of her books but apparently some are set in the City, where she lived for a time, and others have supernatural themes.

This section lists the memorials where the subject on this page is commemorated:
Charlotte Riddell