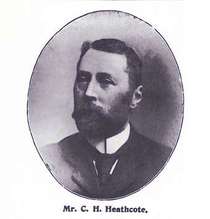 Andrew Behan found the photo and has researched this man: Charles Henry Heathcote's birth was registered in the 2nd quarter of 1850 in Chorlton, Lancashire. He was the third child and second son of the five children of Wilton Cecil Heathcote (1795-1877) and Sophia Heathcote (1816-1898). His father was a Master Dyer employing 8 men and in some records he is shown as Cecil Wilton Heathcote. The 1861 census shows him as a pupil at the Pickwick Road Boarding School, Corsham, Wiltshire, but by the time of the 1871 census he was living with his family at Nassau House, 13 Orange Grove, Bath, Somerset and his occupation was listed as an architect. On 15 January 1875 he was initiated as a Freemason in the Cope Lodge No.1357 that held their meetings in Sale, Cheshire.

On 2 June 1875 he married Mary Ann Grigg née Rawle, a widow, at Holy Trinity Church, Westbury-on-Trym, Gloucestershire. (Her previous husband, The Reverend Alfred Grigg, had died on 7 October 1872). They had five children, Charles Harold Heathcote (1876-1960), Ernest Grigg Heathcote (1877-1947), Mary Martha Grigg Heathcote (1879-1958), Edgar Horace Heathcote (1882-1929) and Gilbert Stanley Heathcote (1884-1969). The 1881 census shows him and his family living at Washway Road, Sale, Cheshire. His occupation was shown as an Architect in Practice, employing 1 Assistant, 2 Pupils and 1 Boy. Also living at the address was his brother-in-law, William Henry Rawle, who was also an Architect, together a Governess and a female domestic servant. The 1891 census shows him living with his wife, 4 of their children, a Governess, a Housemaid and a Cook at Wychwood, Beaufort Road, Sale, Cheshire. His occupation was listed as an Architect. The 1901 census confirms the family were still at the same address. He continued to be shown as an architect as were their sons, Charles and Ernest, whilst another son, Edgar, was an Undergraduate at Cambridge. They were also employing three domestic servants.

In January 1905 he applied to be admitted, by redemption, to the Freedom of the City of London as a member of the Worshipful Company of Glaziers, claiming to occupying premises at 10 Savoy Court, Strand, London and this was granted on 27 January 1905. On the night of the 1911 census he and his wife were registered as boarders at the lodging house of Madame Charlotte Laportres, 60/62 Queensborough Terrace, Paddington. His wife died on 16 February 1919 and probate records show they were residing at Arnside Hale, Cheshire and that her estate totalled £7,329-17s-3d.

On 20 October 1920, aged 70, he married Nora Keens Browne, a spinster, aged 44 years, at the Church of St Leonard, Streatham. The marriage register shows his address as 'Charters' Branksome Park, Bournemouth whilst she lived at 19 Gleneldon Road, Streatham. It is recorded that they both travelled as 1st class passengers aboard the 'Kaisar-I-Hind' of the P & O Steam Navigation Company from London to Gibraltar on 24 December 1925, returning to Plymouth on 28 January 1926 aboard the 'Narkunda' ship of the same company. They also travelled aboard the 'MV Marnix Van Sint Aldegone' of the Royal Nederland Royal Mail Line from Southampton to Algiers, Algeria on 10 March 1933, returning on 3 April 1933 on the 'Johan van Oldenbarnevelt' cruise ship. He died, aged 87 years, on 18 January 1938 at his home, The Gateway, Wilderton Road, Branksome Park, Bournemouth, Probate was granted to his widow and son, Ernest. His effects totalled £61,599-11s-11d.

This section lists the memorials where the subject on this page is commemorated:
Charles Heathcote

Citroën House, an early example of a concrete-framed building, was built in 1...

Architects who designed the 1935 Brady Settlement building. We wonder if this...