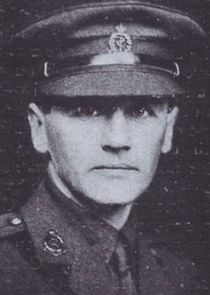 One of 5 sons of Rev. Wilson and his wife Fanny. London Historians: "... Capt. Charles Wilson – the eldest of the boys – died from wounds near St. Quentin, aged 41."

Andrew Behan has kindly carried out some research on this man: Captain Charles Edgar Andrew Wilson was born on 30 November 1877 in Hammersmith the eldest son of the Reverend Alfred Wilson and Fanny Wilson née Cobbe. He was baptised by his father on 31 December 1877 at the St John the Evangelist Church, Hammersmith and the family were living at 3 Leamington Terrace, Hammersmith. The 1881 census shows that the family had moved to 2 Woodstock Road, Bedford Park, Chiswick. Educated in Ashtead, Surrey, then Charterhouse, Godalming and finally Christ Church, Oxford, he entered into a medical career.

On the 23 April 1908 he married Mary Barnes Mein in Newcastle upon Tyne and their only child, Richard Nicholas Wilson was born on 27 February 1909. The family lived at The North House, North Street, Petworth, Sussex. The London Gazette shows that he was made a temporary Captain in the Royal Army Medical Corps on 15 September 1916. He entered France on 27 September 1916 and was initially attached to the Northumberland Fusiliers and then to the Rifle Brigade.

On 28 March 1918 he was seriously wounded in the spine and was taken to the No.1 General Hospital at Etretat, Normandy, France where he died on 8 April 1918. He is buried in Grave II.C.9. at the Etretat Churchyard Extension. Probate was granted to his widow and his effects totalled £8,450-14s-3d. He was recommended to be awarded a Military Cross for conspicuous courage and bravery under heavy fire but this was not granted and he was posthumously awarded the British War Medal 1914-1918 and the Victory Medal.

This section lists the memorials where the subject on this page is commemorated:
Charles Edgar A. Wilson

{On the central plaque:} To the glory of God and in memory of men of Bedford ...