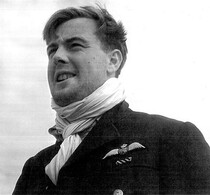 Electoral registers in 1939 show him listed with his family at 15 McLeod Road, London, SE2. In June 1939 he joined the Royal Air Force and our Picture Source shows details of his service. The American Museum in Britain website confirms that for a short time after June 1941, as a Pilot Officer, he was attached to No.71 Squadron.

Telephone directories in 1982 show him listed at Holly Lodge, Bramling Hill, Wingham, Littlebourne, Canterbury, Kent, and this address is confirmed in probate records. He died, aged 69 years, on 30 October 1986 and his death was registered in the Aylesbury Vale registration district, Buckinghamshire. Probate was granted on 4 February 1987 and his effects totalled £81,566.

This section lists the memorials where the subject on this page is commemorated:
Charles Ambrose