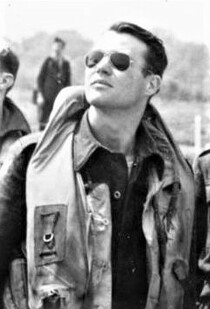 Contrary to the information contained in our Picture Source, Captain Charles Albert Cook was born on 11 July 1916 in Pasadena, California, USA, one of the five children of Charles Albert Cook (1875-1954) and Lessie May Cook née Swartz (1886-1931). He was educated at Alhambra High School, California and in 1940 was training to be a service pilot at the Spartan Aeronautical College, Tulsa, Oklahoma, USA.

Later that year he went to Canada and joined the Royal Air Force Volunteer Reserve. In March 1941 he was assigned as a Flight Lieutenant to No.133 Squadron, stationed at RAF Biggin Hill where he met his future wife, Edna, who was serving in the Women's Auxiliary Air Force. He flew Spitfires in bomber support from July 1941.

On 26 September 1942 when on a raid into France their entire flight was lost or shot down in what became known as the Morlaix disaster. He was captured and became a prison of war for three years at the infamous Stalag Luft III in Sagan, Poland. This camp was where the famous "Great Escape" took place. After being liberated by the Russian Army in the spring of 1945 he was mustered out of the U.S. Army Air Corps with the rank of Captain and the Bronze Star.

After the war he returned to the California Polytechnic State University and took his degree in Agriculture. Upon graduation he became a public high school teacher, retiring in 1985.

He was preceded in death by his wife, Edna, and their eldest son Timothy. Their other son, Patrick of Santa Barbara survived him. He died, aged 95 years, on 13 September 2011 at Villa Alamar Care Home, 45 East Alamar Avenue, Santa Barbara, California, after a long battle with Alzheimer's disease.

This section lists the memorials where the subject on this page is commemorated:
Charles Albert Cook

Thomas Cambell Beswick was born on 18 August 1920, the youngest of the three ...

Aged 36, was shot dead after entering the house in Cutler Street where robber...