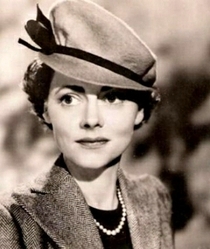 Actor. Born Celia Elizabeth Johnson at 46 Richmond Hill, Richmond, Surrey. Best known for her performance with Trevor Howard in the 1945 film 'Brief Encounter'; which, although it has been parodied many times, still ranks as one of the great 'weepies'. She was reunited with Howard in the 1980 television play 'Staying On'. Created a DBE in 1981. Died at Merrimoles House, Nettlebed, Oxfordshire.

This section lists the memorials where the subject on this page is commemorated:
Celia Johnson

Actor. Born Eldred Gregory Peck in San Diego, California. He appeared in many...