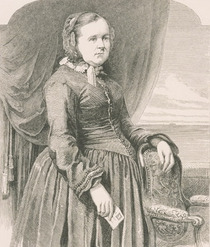 Philanthropist, "The Emigrants' Friend". Born Caroline Jones near Northampton. She followed her husband to India where she became involved in the welfare of the British women there. She carried on her work in Australia, where she is now so admired that her image has appeared on a bank note and on a stamp. And along the way she mothered six children. Died poor and unknown at home, 43A Barclay Road, Fulham. It is said that Dickens used her as the model for Mrs Jellyby in Bleak House which, if true, was not a compliment. The Catholic Church is considering giving her a sainthood. In the picture she appears to have been a very large lady, or that is a very small chair?

This section lists the memorials where the subject on this page is commemorated:
Caroline Chisholm

In 1874, on the death of her father, Mayer de Rothschild, she became the rich...