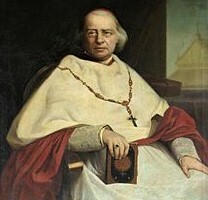 Cardinal Nicholas Patrick Stephen Wiseman was the first Archbishop of Westminster. Born at Seville, Spain, of an Irish father. Click on New Advent for more information.

In the 1851 census he is shown as residing at 35 Golden Square, Westminster with Canon Francis Searle who was his secretary, a butler, a footman and three female domestic servants.

The 1861 census shows him living at 8 York Place, Marylebone still with his secretary Canon Francis Searle, together with a housekeeper, a kitchen-maid and a valet.

He died, aged 62 years, on 15 February 1865 and was buried in Kensal Green Cemetery, Harrow Road, North Kensington. Probate records state that he died at his home in York Place, Portman Square, London, and that when his will was proved on 14 June 1865 his effects totalled under £2,000.

On 30 January 1907 his body was exhumed and reburied in Westminster Cathedral, Ambrosden Avenue, Victoria.

This section lists the memorials where the subject on this page is commemorated:
Cardinal Nicholas Wiseman

1895 appointed vicar when Holy Trinity Church was based in Knightsbridge and ...