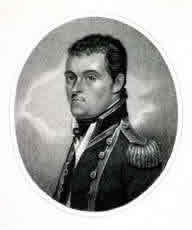 Explorer and navigator of the Australian seas. Born in Donington, Lincolnshire. Invented the Flinders Bar, a device for counteracting the vertical component of a ship's magnetic field, and gave Australia its name.

It was thought that Flinders' remains had been moved in the mid/late 1800s when additional tracks into Euston were laid over the St James Chapel graveyard in which he had been buried. Then the HS2 plans revealed that his grave probably lies "somewhere underneath what is now platform 15" at Euston Station. 2017 BorderMail reported on the chances of the HS2 dig being able to ID Flinders remains when the "biggest exhumation in British history, of more than 60,000 bodies" begins. The best chance according to the lead archaeologist will be "if they could discover an intact coffin with a metal name plate". Yes, we can see that would help. January 2019: His remains were found and identified. 9News has a short film showing the burial plaque and featuring the debate about what should happen to it.

October 2019: The government announced: "His final resting place will be in at the Church of St Mary and the Holy Rood in Donington, near Spalding, where he was baptised, and where many members of his family are buried. There is currently no set date for when his body will be reburied in at the church." But, May 2020, it seems the burial has not yet taken place.

This section lists the memorials where the subject on this page is commemorated:
Captain Matthew Flinders