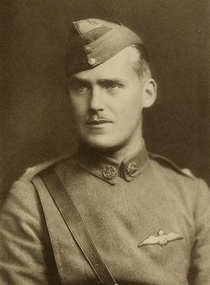 From Hellfire: "Killed in action while carrying out a bombing raid on Epéhy Station, France on 21st July 1916, from RFC Communiquésés 1915-1916 I note that six R.E.'s of 21 Sqn. Were involved and fourteen 112-pound bombs were dropped. Two burst in the station and others on the line north of it and in the town. Jack Oliver Cooper was one of three pilots from that squadron to be posted as missing."

From Hyde Park brochure: "The pavilion was built with the help of £5,000 donated by a Mr D’Arcy Cooper in memory of his son."

Our colleague Andrew Behan found the photo and adds the following:
Cooper was born in Surbiton, Surrey, the son of Sir Alfred and Lady Marion Cooper, nee Nicholson. His father was a tea merchant. He was baptised at St Marks Church, Surbiton on 8 June 1896. The 1911 census records him as a 14 year old schoolboy boarder at The Knoll, Peterborough Hill, Harrow-on-the-Hill.

He sailed from Southampton on 23 April 1913 to New York, USA, aboard the S.S. Olympic which arrived on 1 May 1913 and his address was given as Ossemsley Manor, Christchurch, Hampshire. It is not known how or when he returned, but he gained his Royal Aero Club Aviators' Certificate on a Maurice Farman biplane at the Royal Military School, Brooklands, Surrey on 29 January 1915.

Probate following his death, aged 20 years, was granted to his widowed mother and his effects totalled £427-7s-0d.

Note: You may have spotted that Jack apparently had two Dads: Alfred and D'Arcy. Since Alfred had predeceased his son we think that D'Arcy (a wealthy industrialist) may have been a close relative who, in the absence of the boy's father, chose to commemorate Jack. We're looking into it.

This section lists the memorials where the subject on this page is commemorated:
Captain Jack Oliver Cooper