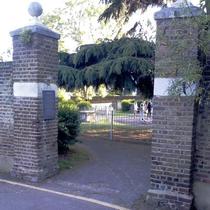 From 1782 it had served as a burial ground for the Parish of St Mary the Virgin, Twickenham, but was nearly full by 1835, when a new Burial Ground in Oak Lane was opened. The older burial ground was officially closed in 1868, although it is known that some burials, in family graves, continued until after 1875. There is, in Twickenham Library, a record of the inscriptions on the 196 tombstones and monuments which could still be read in 1930. About 450 names are listed, although there were probably many more unmarked graves. Many burials were those of children who died in infancy.

This garden was first laid out for public use in 1953 and is now known as Holly Road Garden of Rest.

This section lists the memorials where the subject on this page is commemorated:
Burial ground for St Mary the Virgin, Twickenham

The generous incumbent of Holy Trinity, Hoxton in 1864. Theologian and antiqu...

An early church was demolished in 1720, leaving only the clock tower. The new...