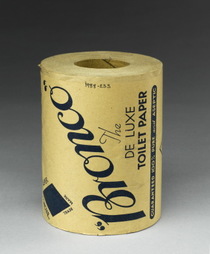 The Science Museum (our Picture source) caption their image with "Toilet paper, 'Bronco' brand, London, England, 1935-1950". The rest of the entry is well worth reading, using expressions such as "seemingly non-absorbent" and "the bigger wipe". If this brand ceased in 1950 we can, from personal experience, confirm that others found the market profitable enough to continue manufacturing products equally unfit for purpose.

Planning Register gives: "The British Patent Perforated Company based in Hackney Wick was one of the first British firms to produce this type of toilet tissue using the brand name Bronco." And Grace's Guide puts the British Patent Perforated Paper Co in "Atlas Works, Berkshire Road, Hackney Wick". About the Atlas Works they write: "The eastern range of the Atlas works still survives, but a fine three storey building, with a large stone figure of Atlas, was demolished in 1983." but we don't know when that "still" referred to.

This Science Museum page gives the various addresses occupied by the company, putting them in the Atlas Works 1910-58 and being acquired by Peter Dixon & Sons in 1955.

Take a moment to savour the various type faces on the packaging.

This section lists the memorials where the subject on this page is commemorated:
Bronco toilet paper

The idea of adjusting clocks in order to benefit from daylight was first prop...

Norwegian gratitude for support in WW2

See Norwegian Government-in-exile. This gratitude is made manifest each Chri...