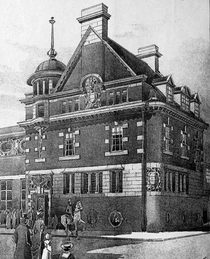 One of many public libraries founded by John Passmore Edwards. Designed by S. B. Russell, it is a Grade II listed building and features the ornate 'Macullum' clock, which is named after a local philanthropist. After its opening, it soon proved to be too small and was extended. 1962 the library moved out to another extension in Stafford Road leaving this building as Vernon Hall. In 2002 it reopened as the first 'Ideas Store', offering adult education classes, library services and a café. The picture shows an original drawing for the library, although the cartouche plaque on the gable and the cupola were not included in the finished building.

This section lists the memorials where the subject on this page is commemorated:
Bow Library