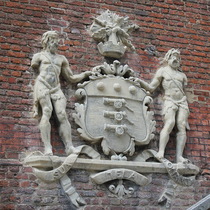 Royal Arsenal Gatehouse - Board of Ordnance

GR IV {On the ribbon of the Board of Ordnance badge, their motto:} Sua tela ...