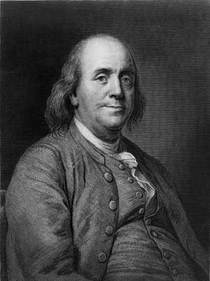 Natural philosopher, writer, revolutionary politician and inventor. Born Boston Massachusetts. Spent 1724-1726 in London working in the printing business and wrote a pamphlet. A keen swimmer, he often swam in the Thames. Was in London again, 1757-62 staying at 7 Craven Street, petitioning the British authorities on behalf of the Pennsylvania assembly. In London again, 1764-75, to petition king George III. 1783 signatory to the Treaty of Paris. Owned as many as 7 slaves but later became an outspoken critic of slavery.

Quote: "Nothing can be said to be certain except death and taxes." Invented: a heat-efficient stove - the "Franklin", bifocal glasses and swimming flippers. Died in Philadelphia.

Formerly part of Kent, it has been part of Greater London since 1963.

Known as ‘The Strong Box of the Empire’, the Public Record Office was created...