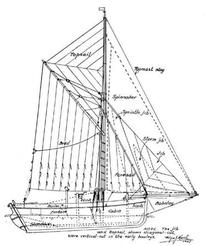 Whitebait were caught by this type of craft in the River Thames, until 1950.
The picture source website tells us that the Bawley is a variation of the 'smack' type of ship. The name "is probably derived from the boiler on board, which was used to 'bawl' (Essex slang for 'boil') the shrimps immediately after the catch. She is clearly still reminiscent of her precursor the Hoy, by her fully clinkerbuilt hull form and the boomless gaff rig." Clearly.

This section lists the memorials where the subject on this page is commemorated:
Bawley fishing boat

From Finlays we learn that: James Finlay (d. 1790) began his career in Glasgo...