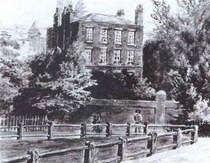 This Georgian house was on The Green, Hampstead, in an area now occupied by the west-most part of the Hampstead Royal Free Hospital. It was Sir Rowland Hill's home for 30 years, during which time Samuel Sanders Teulon was his neighbour - more info about the locality on that page. The Picture source has an 1896 map showing exactly where, and says "Following the death of Sir Rowland Hill, his son sold Bertrams {sic} and three acres to the {hospital} board and the house was used as a nurse’s {sic} home." All the Georgian buildings were demolished by 1905.

2017: Reading an article concerning smallpox in Hampstead, in the Camden History Review 41, we learnt a little more about this house and its locality. In 1867 the Metropolitan Asylum Board announced its plan to build a fever and smallpox hospital on "Old Bartrams" the site now occupied by the Royal Free and adjacent to Bartram House. Hill, his wealthy neighbours and the Hampstead Vestry all vigorously objected, based on the widely held belief that diseases spread through the air. The Hampstead Fever Hospital was nonetheless built and enlarged and opposition continued, through the law courts.

When Hill died in 1878 his son Pearson took on the cause and the battle continued until 1883 when an agreement was finally reached. This included the MAB purchasing Bartram House and three acres of land. Initially the House was used as a nurses' home, and the hospital expanded onto the newly acquired land. In 1901 the House was transferred to the next-door Hampstead Home Hospital, in exchange for some of their land. They demolished the house and erected a new building (foundation stone here), renaming themselves the Hampstead General Hospital. The two hospitals remained separate until 1973 when they were both demolished and recreated as the Royal Free.

This section lists the memorials where the subject on this page is commemorated:
Bartram House

Continued the development of Bloomsbury including the building of the Covent ...

Road in Beckenham, Kent. David Bowie lived at number 24 in Flat 1 from March ...

Wimbledon landowner and important member of local society. In 1854, Devas and...