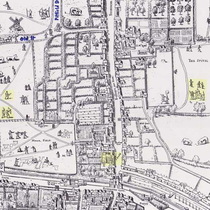 From HAC: Henry VIII's "Fraternity or Guild of Artillery of Longbows, Crossbows and Handguns ... practised in the Artillery Ground in Bishopsgate (Spitalfields) until around the 1560s. During the years of the Armada threat in 1586-1588, this practice ground was again used by the officers who trained the City of London’s Trained Bands and who were also known as the ‘Captains of the Artillery Garden’. The word ‘artillery’ was used at this time to describe archery and other missile weapons, while bigger guns were known as ‘great artillery’. In 1611 practice was again revived in the Bishopsgate ground when the ‘society of arms’ also used the space for training. This 1611 group, who were performing the same training in the same space used by the 1537 fraternity, are the certain ancestors of today’s Honourable Artillery Company."

The map comes from the Bowyers site. They've yellow-highlighted the archery fields and the one over at the right is the Spitalfields Gardens - you can see the men drawing their bows.

This section lists the memorials where the subject on this page is commemorated:
Artillery Gardens in Spitalfields

Summarised from Army Cadets: In 1859 the Volunteers were formed (forerunner t...