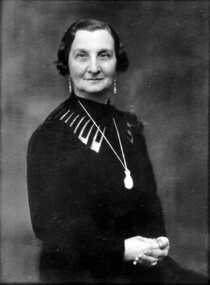 The 1901 census shows her living with her husband, a Wall Paper Dealer, and their children at 118 St Sepulchre Gate, Doncaster, Yorkshire.

In January 1905, when her husband applied for and was granted British Naturalisation, they were living at 47 Balby Road, Doncaster, Yorkshire. They were still living here at the time of the 1911 census.

Her husband served as Mayor of Doncaster Borough Council for 1920-21 and was elected as an Alderman on the council in 1923. He again served as Mayor for 1936-37 and was made a Freeman of the Borough in 1937.

Probate records state that her home address was 4 Belvedere Avenue, Alwoodley, Leeds, Yorkshire and that she died, aged 80 years on 26 February 1953 at the Upper Pleasure Grounds, Bournemouth, Hampshire, Probate was granted to her son William who was described as a company director and her effects totalled £4,814-11s-9d.

The photograph was taken in 1936 at the time of her husband's investiture as Mayor of Doncaster and she is wearing her Lady Mayoress chain.

This section lists the memorials where the subject on this page is commemorated:
Anna Morris

Weightlifter. Born in either Prokopyevsk, Russia or Poland, he moved to Israe...

Born at 2 Queen's Crescent, Glasgow. he studied in Tübingen and Glasgow. Foll...