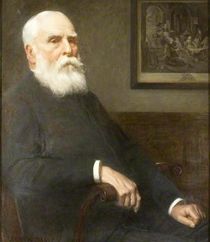 Politician. He was elected as Liberal member of parliament for the southern division of Essex in 1868, but lost the seat at the1874 election. He was appointed Justice of the Peace in 1866, and served as High Sheriff of Essex from 1880 – 1881. When the Essex County Council was set up in 1889, he was elected as its first chairman, and served in the post for 27 years.
He founded the Wilfrid Lawson Temperance Hotel at Woodford, where he lived, and was a verderer of Epping Forest from 1878 to 1887. Married to Charlotte.

This section lists the memorials created by the subject on this page:
Andrew Johnston

This bridge was opened on March 30th 1915 by Mr. Andrew Johnston Chairman of ...

Administrator of the Putney Pest House Charity, 1862. Drummond is the only n...