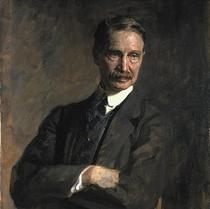 British Prime Minister. Born Kingston, New Brunswick, (which at that time was a British colony and not part of Canada). After his mother's death in 1870 he moved to Scotland. Elected to parliament in 1897, he succeeded Arthur Balfour as leader of the Conservative party in 1911. The major issues of his leadership were tariff reforms and Irish home rule. He retired from politics in 1921 because of ill health. When the Conservatives withdrew from the Lloyd George coalition government in 1922 he was recalled to serve as Prime Minister. Diagnosed with throat cancer and unable to speak in parliament he was forced to resign in 1923. Died at 24 Onslow Gardens.

This section lists the memorials where the subject on this page is commemorated:
Andrew Bonar Law

Medical adviser to City Companies, with an interest in history, particularly ...