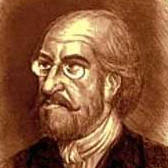 Poet. Born on the island of Zakynthos (then part of the Venetian Republic). In 1802 his father took him and his brother to a Greek community in Livorno, Italy and he never saw his mother again. He met the poet and scholar Ugo Foscolo and they travelled to Britain together in 1816. Here he taught Italian and Greek and published a modern Greek grammar. Returning to Italy he joined the revolutionary group, the 'Carbonari' and was eventually arrested and expelled. His 'Odes' were published in 1826. After more travelling in Europe, he eventually settled in Louth, Lincolnshire where he died. His remains were moved to Greece in 1960.

This section lists the memorials where the subject on this page is commemorated:
Andreas Kalvos

Born a protestant in York but became a Catholic when his widowed mother marri...