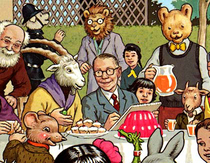 Author and illustrator. Born Alfred Edmeades Bestall in Mandalay, Burma. He served in the army during World War 1, transporting troops in red double-decker buses. Following his studies at the L.C.C. Central School, he was hired to illustrate books by Enid Blyton. In 1935 he succeeded Mary Tourtel as the illustrator of the Rupert Bear stories in the Daily Express. In 1965 he retired from the paper but continued illustrating the cover of the Rupert Annual until 1973. Died at Wren Manor Nursing Home, Porthmadog, Wales.

This section lists the memorials where the subject on this page is commemorated:
Alfred Bestall