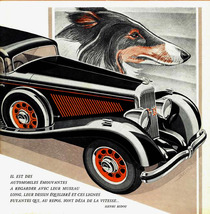 From Velocetoday we learn: Kow was born near St. Petersburg as Alexis Kojewnikow (or Kogeynikow) and was studying in Switzerland when the 1917 Russian revolution happened. He went on to Paris where his artistic talent was discovered and in 1922 he created his first advertisements for Panhard et Levassor. Kow specialized in automobile advertising but did also do some sculpture. That site has some photos of Kow's wife and daughter (and lots of his splendid artwork) but no picture of the man himself so we have used one of his auto ads instead. You can see the stylistic symilarity with the Lenin bust.

This section lists the memorials created by the subject on this page:
Alexis Kow

A purpose-built public gallery dedicated to commissioning location-specific a...