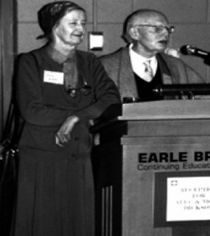 Community educationist. Born Alexander Graeme Dickson at Duxhill Lodge, Ruislip. He served in Africa in World War II, where he began to formulate his ideas for mass education. He returned in 1948 and introduced a number of community development training schemes. Back in Europe he assisted refugees escaping from the Soviet Union's occupation of Hungary this experience prompted him to set up Voluntary Service Overseas (VSO), to tap the energy of young people for community service. In 1962, he and his wife founded Community Service Volunteers (CSV), which was a similar organisation, but focused on British youth. Died at his home, where the plaque now is. The photograph shows him with his wife Mora.

This section lists the memorials where the subject on this page is commemorated:
Alec Dickson

The school buildings are still there, on the North Side between Wix's Lane an...

Established in the East End as the Bedford Institute Association to act on Ed...