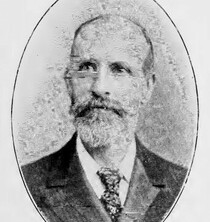 J.P. and member of the Electric Lighting and Tramways Committee, West Ham, 1905.

From LondonWikia: "Leslie William Spratt was a businessman and local politician active in the West Ham area. Born in Winchester, Hampshire, Spratt moved to London, initially living in Edgware Road. In 1871 he married in Alice Petrie in Bethnal Green. He moved to Forest Gate where he established a draper's shop at Woodgrange Road. This became the firm of L W Spratt & Sons. He was elected as a councillor representing Plaistow Ward on West Ham Borough Council in the 1890s. He rose to become an alderman and served as Mayor of West Ham on two occasions in 1901-02 and 1906-07. When the Metropolitan Water Board was formed in 1903, Spratt was appointed to the new body by West Ham Corporation. He retired to Westcliff-on-Sea on the Essex coast, where he died aged 76. He was buried at the City of London Cemetery.

This section lists the memorials created by the subject on this page:
Alderman Leslie Spratt

Political activist and writer.  2012 co-authored 'A People's History of London'.

Son of Sir Francis Wyatt Truscott. A printer and a stationer. Knighted in 190...