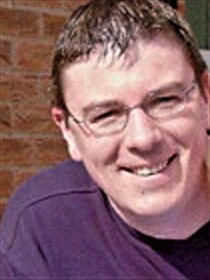 Adrian Johnson was born 9 May 1968, his birth being registered in the Mansfield, Nottinghamshire, registration district. He grew up in Skegby, Nottinghamshire and in September 1991, in the Mansfield registration district, he married Catherine J. Hollingsworth. They had two children, Christopher and Rebekah. He was a textile technologist working for Burberry and electoral registers from 2003 to 2005 show them listed at 11 Grange Farm Close, Sutton-in-Ashfield, NG17 1NJ. His obituary can be found on the BBC News website.

He died, aged 37 years, on 7 July 2005 when travelling in the underground tunnel of the Piccadilly Line on the London Underground Railway between King's Cross and Russell Square underground stations that was targeted by a suicide bomber. The narrative verdict of his death can be found on the Coroner's Inquest Report.

This section lists the memorials where the subject on this page is commemorated:
Adrian Johnson