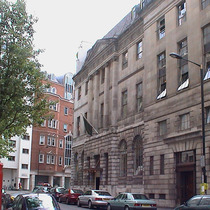 Petty & Selfridge at the Lansdowne Club

Built as Lansdowne House in 1763, designed by Robert Adam, later altered by George Dance the Younger and then by Robert Smirke, and then by T. H. Wyatt.  Harry Selfridge took over the lease in 1921.  In the 1930s it was remodelled by Charles Fox for use as a private club and the front of the house was removed to enable the creation of Fitzmaurice Place. The First Drawing Room was re-erected in the Museum of Arts in Philadelphia and the Dining Room in the Metropolitan Museum in New York. The building (what's left of it) was restored in 2000.

This section lists the memorials located at this site:
Petty & Selfridge at the Lansdowne Club

This section lists the memorials located nearby this site:
Petty & Selfridge at the Lansdowne Club