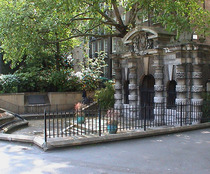 This gateway marks the position of the north bank of the River Thames before the construction of the Victoria Embankment in 1862. It was built in 1626 by Nicholas Stone, master mason, for George Villiers, 1st Duke of Buckingham, to serve as the watergate to York House which the Duke had acquired from the Archbishop of York in 1624. The arms on the river front and the motto "Fidei cotucula crux" (the cross is the touchstone of faith) on the land side, are those of the Villiers family. York House was demolished in 1675 and streets were laid out on the site. In 1893 the gate having fallen into decay, the London County Council obtained parliamentary powers to acquire and preserve it as an object of public interest.

The streets laid out on the site of York House were named: Villiers Street, Duke Street, Buckingham Street, George Court and Of Alley (now York Street). That's known as making use of everything.

Now 100 metres away from the Thames, this used to be where boats would pull in to allow passengers to disembark for York House. Londonist's post includes a wonderful 3D model which allows one to see the waiting-rooms inside. Baldwin Hamey has a good post on this gateway and the local area.

This section lists the subjects commemorated on the memorial on this page:
York Watergate

Master mason, for George Villiers, 1st Duke of Buckingham. Our image shows an...

This section lists the subjects who helped to create/erect the memorial on this page:
York Watergate

Records of this coaching inn date back to 1542 although the current building ...

"The splendid struggling mothers..." is surely a quote from something, perhap...

This small plaque is on the inner gate pier to the left of our photo. From Lo...